Swiss botanist A. De Candolle, after studying herbarium samples containing reproductive organs – cones, has set aside the plant into a separate genus Microcycas.  It´s arboreal character was recognised and first described by American botanists O.W. Caldwell a C.F. Baker based on an observation in nature.
The name Microcycas expressed the idea that the material studied /probably a very young plant/ belongs to a miniature genus of  cycad family. The species name calocoma expresses the unique arrangement of the leaves into a near-to perfect round shape of the crown and means beautiful crown. Microcycas calocoma – a small cycad with a beutiful crown. 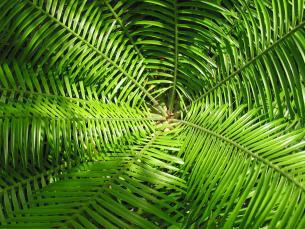 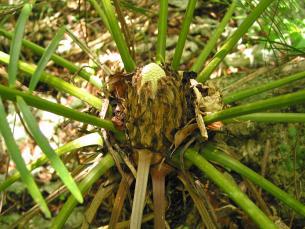 A cone emerging in crown of a young plant 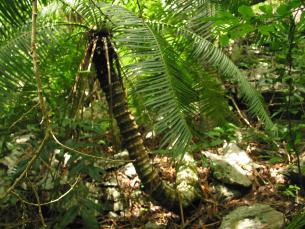 The cuban name palma corcho is explained by a local expression corcho – beehive in a hollow trunk or corcho – fishing float.